Historical Notes on Prato, a guide for tourists 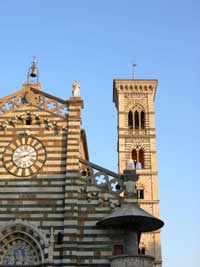 Some stories help us understand how Prato was already inhabited at the time of the Palaeolithic, although the most important discoveries, especially in the area of Campi Bisenzio, we have from the age of the Etruscans. One of the most interesting discoveries was demonstrating how, already at Prato is distinguesse for weaving, which have testimonies from the sixth century BC

After the Etruscan was the time of the Romans, which in their differences, used the territory to Prato century, few indeed finds that testify human dwellings in that period.

Prato on the high Middle Ages saw the domination of the Lombards and Byzantines, under which a work was completed remediation of the Plains and the resulting construction of the water system, which would set the course of the river Bisenzio. After the retreat of Alberti family, in 1107, Prato began to grow as a common free.

They were two centuries of economic prosperity that saw the flourishing industry and a substantial population growth, which led to the need to build strong fortifications, as were other cities that aspire to become control over Prato. First of all Florence, where Jeanne D'Anjou sold the city in February 1351.

Prato however, continued to flourish even under the rule of the Medici family and later under the Republic of Florence. On 29 August 1512 Prato suffered a severe attack by the League of Santa, from which it came out damaged.
It was with the arrival of the Lorraine Grand Duke of Tuscany that Prato met again a thriving, economic, cultural, with major projects of beautification of the city.

The true economic development to come after the Prato in Italy Unit, when the city will know not only a great demographic but also a strong industrialization especially in areas related to the textile industry of which Prato is the undisputed center of Tuscany.

The years following the Second World War, until the present day, Prato has seen a substantial immigration from the countries coming first southern Italy, and later, the countries Extra, which resulted in a large city workforce.

Today Prato is known as one of the cities with the largest influx of Chinese who have entered the city by buying factories and producing low-cost, no accident is considered the Chinatown in Tuscany.

O Corridor Castle, was wanted in order to connect the small fortress with the door east of the castle. On the wall are a number of windows in a small bezel alternate rectangular windows.

At first the walls, finished in 1196, had a square shape and consisted of

With demographic expansion out of the suburbs, it was considered necessary to widen the walls and around 1338 and 1351 were built walls between the door and door Gualdimare S. Trinita.

The doors of the walls then went to build real neighborhoods: